My inspiration as I stated before was the classic Peanuts book the legend of the great pumpkin, I had it sitting in my room thanks to my little monkeys. I knew that the Lawn Fawn Stitched pumpkin dies would be perfect to try and recreate the cover of the book.

To begin the cards I started by grabbing everything I thought I might want to use this way I spent less time rummaging around, well that was the hope but in the end I kept having to fish things out of my stash. I pulled out my distress oxide inks, blending brushes, cut down some Bristol cardstock 4¼ x 5 ½,  pulled out some orange, black and green cardstock, and my lawn fawn pumpkin dies.

I created the night's skyline with more colours than I thought I needed by the time I assembled everything lol.

The backgrounds I created consisted of mustard seed, carved pumpkin, Seedless preserves, wilted violet, blueprint sketch, and Chipped Sapphire.  I used the picket fence blending brushes to create the look and every time I use them for my project I just have to rave about how awesome they are. The blend in person is just so smooth and seamless and easy on my hands which for this project helped a lot as I had been suffering from a sore wrist.

Once I was happy with the blend of the sky I decided to add a little extra something by creating a full moon, to me this added more elements of Halloween to it. To accomplish this I created my own stencil using some acetate, a circle die and my die cutting machine. It had a few jagged edges but all in all I was happy with it.  I personally used some gilding polish from my stash but have linked to equivalent products for your convenience. I applied the polish with the applicator it came with but you can use a blending tool as well. 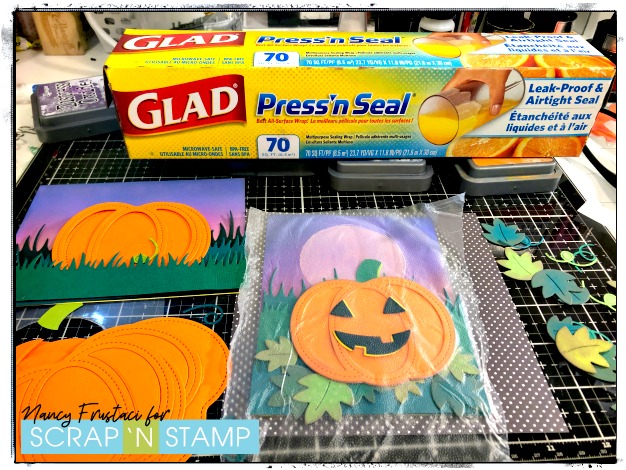 Now that the night sky backgrounds were finished it was on to the bulk of the card. There was a lot of die-cutting for this card but, in the end, it was really worth it.  I started with the pumpkins, which I die cut numerous times using orange cardstock, then i went on to the leaves, stems, and grass using multiple shades of green cardstock from stash.

I went around all the leaves and pumpkins with ground espresso ink just to give it some dimension and shading. After that, it was time to figure out the layout, once I had something I was happy with I decided to use some peal and stick to help me keep things in place (nothing worse than forgetting how you had everything) while I adhered everything down. This didn't happen right away so I am glad I used the peel and stick so I didn't lose all my pieces. 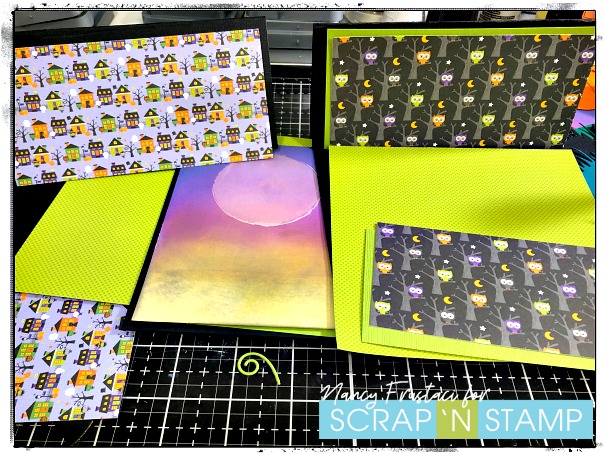 Obviously, I could not glue things down till I actually had a base for my card. I have really been bored doing the same style of cards as of late, so I decided to switch it up and create an easel card, which in the end worked out great because it allowed for me to create more of a scene.  I created a larger than (my) normal card base measuring and a slightly under 6 x 6 ( had to fix little errors lol)  from there I folded the top panel in half and scored it with my bone folder.  I then went on to cut down some card stock and pattern paper from my stash to fit on the segments of the card. I cut the pattern paper in half to measure  to 2 7/8 x 5 6/8 to adhere to the top portion of the card.

For the inside of the card, I cut the pattern paper down to  5¾ x 5¾  and glued it flat.  After that, I went on to create the little second panel, which is elevated to help hold the top of the card upright. (sorry I am really drawing a blank in describing this part of the card) I cut down some white cardstock to 4½ x 5 and layered it with some foam on to a piece of black cardstock which measures 4 5/8 x 5 1/8. I layered that onto the card carefully as I needed to make sure it was not too far back that I couldn't tuck the main panel behind it, which helps prop it up.

Now that the card base had been created it was time to put it all together. I decided last minute to add die cut of some houses in the background, I felt this just added so much more to the scene.   I glued that flat to the distress background, from there I popped up different layers of the grass (some of which really didn't need to be there because they are covered up) and then moved on to the pumpkins. I took that press and seal panel with everything in place added glue and foam squares were it needed and added on to the panel. Because I had cut out so many pumpkins I did end up having a lot of the negative piece from the inside of the frame, which I ended up using to create other pumpkins that I ended up tucking behind that cute jack-o-lantern, so there really wasn't much waste. Yay 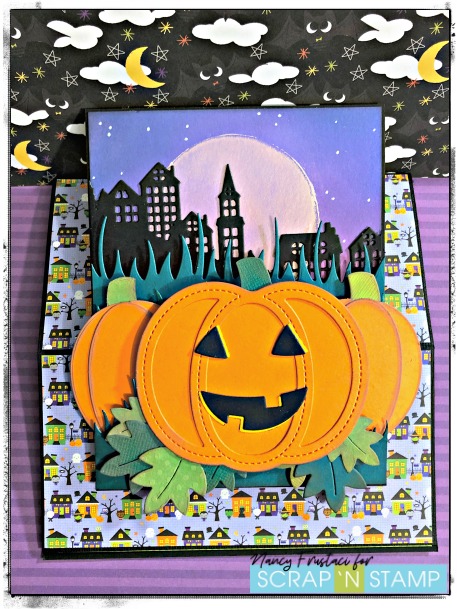 To finish it off I die cut the Happy Halloween sentiment using orange and black cardstock scraps and then glued them together off set to create a little shadow effect, once they dried I added them on to the inside panel of the card.

For the finishing touch to this card,  I took a white paint pen and added in some stars to the sky, it just needed that little element, which I was scared to  do with other mediums as I mentioned before, there was suppose to be a second version of this but I botched it  royally by trying to stencil texture mousse onto it.

So any who, hope you were able to get some Halloween Momentum from here and as always we welcome all input and feedback.

Have a Great Safe Halloween