Oh what fun I had creating this spooky halloween card, and boy did I get messy in the process.  I have to tell you, as I was creating this card I really had a hard time knowing when to stop. I an not one that gravitates to mixed media type style for creating but I know now I need to do more of it as it really opened up my creative juices.

I pulled out my distress oxides, distress crayons, texture paste and stencils and went to town! All products are linked below.

I started off the card working on the tag, which is a large Distress tag from Ranger.  This is the focal point of the card and what the lovely witches are standing on. 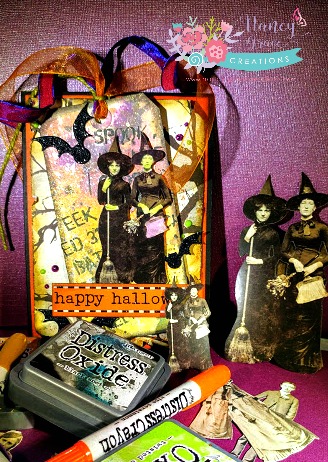 The first step in creating this fun tag was to smooth the distress oxides on to my craft mat and spary with water.  I then brough the tag to the color and smooshed it all around.  In between each layer I took time to dry it with my heat tool, then would go back and smoosh it in the ink again.

I then took my texturhed paste and mixed it with some black soot distress ink.  I then strategicly added the stenciled images to the tag, picking and choosing which parts of the stencil I would use.  Once the texture paste was dry I came back in with some Wild honey distress Spray and spritzed the tag.  Once that was dry I did the same thing with a mini mister and gold perfect perls.  I love the shine this brought in.  Once that was dry I added Copic Opaque ink to a block and watered it down and splattered the tag (this was a technique I picked up from Amy Rysavy)

As the tag was drying I decided to take by green distress crayon and colour the witches’ skin to add an extra element.  From there I created the card base using black cardstock which meassured 5x7, the first layering piece was created from Orange Peel cardstock from SimonSays Stamp. which is  6¾ x4¾  and the second layer I used patternpaper  from the Spellbound collection by Simple Stories, this layer was 6½ x4½.

I distressed the orange layer with the ripe persimmon distress crayon and black soot distress ink.  I decided to also distress the patterned paper. For this portion I used brushed corduroy distress crayon, vintage photo distress oxides, as well as black soot. Once the colour was on I went old school and tore the edges of the paper to give it some interest and then rolled up the corner, which allowed for the patter on the reverse side to show through.

After everything was dry and I was sure I didn’t want to add any more, I adhered each layer to the card base, before I added the tag to the cardbase, I took some ribbion/twine from my stash that coordinated with the colours from the tag and patterned paper.  I looped the ribbon through and tied it off with extra twine.  I adheared the tag on to the card base with a double strip of foam tape.  From there I added the whitches with some foam dots, as I felt they needed to pop out just a bit more as they are the stars of the card!  For the sentiment I used a chipboard sticker from my stash as well as the sparkly bats, and because I just didn’t know when to stop with this card, I decided to add some of the Nouvo Jewel drops in apple green and purple rain.

Here's your chance to win!  Scrap'n Stamp is giving away a $25 coupon for every stop on the blog hop!  So make sure to take a moment and comment on on all the designer's fabulous work.  Winners will be announced Oct. 20th, and must email Scrap'n Stamp to claim their prize! GOOD LUCK!

Thank you for stoping by and having a Frightingly fantastic hop!

Nancy Frustaci <----You are here